Yeti again.  We had to come off the trail for a few days to let my leg heal.  It started off being a disappointment but turned into a fun little whirlwind tour of New Mexico’s hot spots. 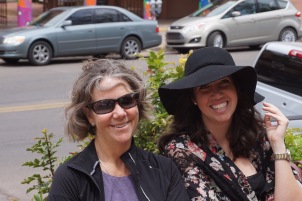 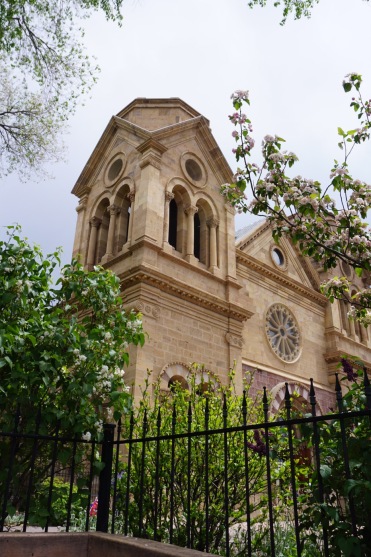 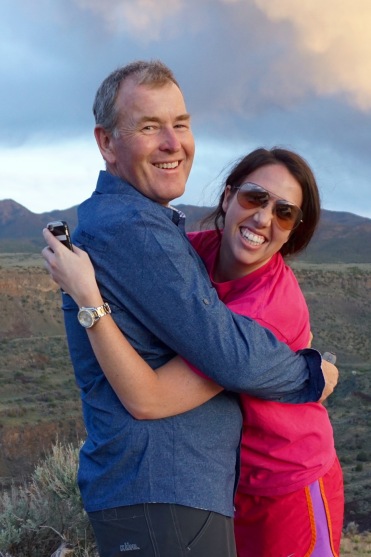 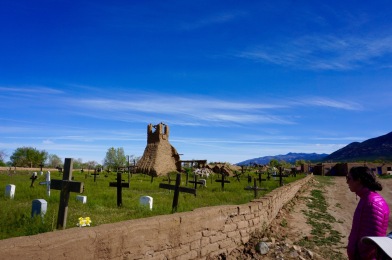 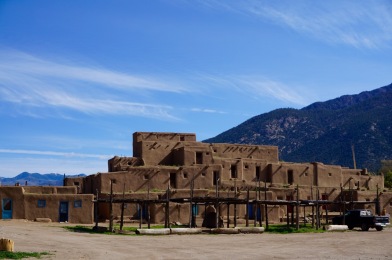 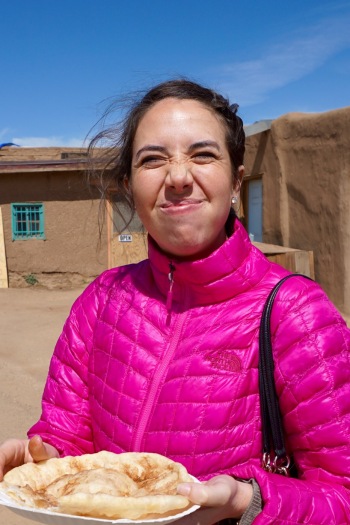 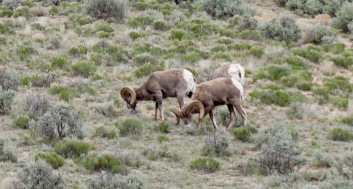 Maddie flew into Albuquerque Saturday morning, picked up a rental car and drove to Grants to pick me up.  We quickly loaded up and headed off to Pie Town to reunite with Walkabout….and try the pie.   New Mexico doesn’t have a lot of roads so when we turned off of hwy 117 onto a small dirt road named Pie Town Rd we were pretty confident that we were going the right direction.   After about 25 miles and progressively deteriorating road conditions we started to doubt our decision, but soon enough it all came right and we came to Pie Town.

Walkabout wrote about Pie Town in his daily blog so I will let that stand as our description but we were not disappointed.  Most of all we were delighted to have Walkabout back.
After sampling  pie in two different spots we headed off towards Santa Fe.  We hit Santa Fe in time to explore the plaza a bit and catch some dinner in one of the restaurants that line the streets.  After dinner we strolled the square and listened to some live music.  It was a festive atmosphere but after a day of traveling we were all ready to turn in early.

The next morning we were back in Santa Fe early.  There were shops to explore and as an added bonus there was an antique car show in the plaza.  Santa Fe is famous for its Art and Silver and we spent a pleasant morning wandering from shop to shop admiring the wares from local artists.  Soon, as always happens when Walkabout and Maddie are together, the focus turned to food.  There were several little vendors selling tamales and local foods and we sat down to a delicious snack.  I thought it was very filling but my companions were just getting started.  Coffee was next in line.  Walkabout had noticed a little French cafe earlier yesterday and that became our destination.   The coffee was great.  So was the French onion soup, ham sandwich, strawberry crepe and pain aux raisin.  Good thing we will be waking again soon.

The weather turned rainy and cool so we nixed anymore outdoor activities and, once more, went out to get a beer and more food.

The next morning we got up early and headed out for our next adventure.   We were planning on spending the day at Ojo Caliente Springs.  One hour outside of Santa Fe, Ojo Caliente is a beautiful collection of hot pools nestled in the mountains of New Mexico.   We easily lost ourselves in the restorative pools as several rain showers and thunderstorms rolled overhead.   Ojo was a perfect spot to relax and enjoy a down day.  Wanting to maximize our time the next day in Taos, we decided to spend the night in Taos, so after having a pretty mediocre dinner at the resort, we once again headed off.  What we encountered on our way to Taos was truly unexpected and extraordinary.

We were driving along a fairly flat,open area wondering why the GPS was telling us that it would take an hour and a bit to travel 40 miles when the road started to bend and twist.  The next thing we knew we were looking down into a miniature Grand Canyon.   We pulled over to admire this beautiful and dramatic canyon right in the middle of nowhere.   Then we noticed that our road dropped into this canyon and turned into a dirt road.  No wonder it was going to take an hour and a bit!  Undaunted, Maddie embarked upon the journey and we were rewarded with several spectacular views of the canyon and the Rio Grand River that traveled along the bottom.

Arriving in Taos around 8:30 we checked into our hotel and called it a night.  We had had a great day.

Taos was waiting to be explored the next day so after a quick cup of coffee we were off to tour the Taos Pueblos.   We spent an interesting hour taking a guided walking tour of the pueblos and then wandered around some of the homes that were turned into shops. Maddie found her fry bread and Carl found his freshly baked bread.  The foodies were happy.    At least until we could make it into town to find a “good” coffee and a spot for lunch.  We wandered the plaza and poked around in a few more shops, drove out to the Rio Grand Bridge for one more windy and cold look at the canyon, then headed back to town. We stayed at a great place in Taos called the El Pueblo Lodge and had one of the best dinners ever at a restaurant called the Love Apple.

Wednesday, our last day together, we headed off towards Raton where Maddie would leave us at there bus station and drive back to Colorado.

We waited in Raton at the Amtrak station where our bus ticket said we should meet our bus and all the signs also said we should be. Another Greyhound bus driver also confirmed we were in the right place. We saw our bus arrive in town but then it just drove right past the bus station. I was on the phone to Greyhound demanding they contact the bus driver and get him to come back and pick us up. No luck with that but after many phone calls and hijacking the other bus drivers phone to talk to the area supervisor we got agreement that they would pay for our accomodation for the night and put us on tomorrow’s bus.

So now we had an unexpected free night at the Best Western in Raton. We made the most of our time going out to the hotel resturant for dinner and drinks. We tried to get the bar maid to make us an Aussie Margarita like Walkabouts dad used to make. The first one was Ok but the second one was a horrible failure. Walkabout finished his two but could not face finishing my second one.