We are getting back into the swing of the earlier morning starts and wake when the morning birds start to sing at first light. We have got packing up down to a fine art with us both having our dedicated jobs to get us on the trail.

Early morning is my favourite time of day. I love the coolness of the air, the beautiful warm colours that the world takes on and the excitement that I feel in what the day may bring. Every new day promises a new adventure and on the trail that adventure may be hard but it is always exciting.

As we walk past the solar well we saw last night the horses from one band are making their way to water. The stallion is at the back with his ears down pushing his band of mare’s along making sure they stay away from any other stallions. Yeti is again excited and we stop several times to watch them go.

Our goal this morning is the top of the hill that marks the end of the plane we started yesterday afternoon. It seems like a good goal until we get to the top and look over to see another plane as long as the one we just crossed. I took a photo in each direciton from the top which are below. If you look at them about the only difference is the shape of the hills way off in the distance.

Our next goal was the A&M reservoir and to pass the time we had Brother Fish audio book playing. As we follow the road we come to an intersection, scratched into the dirt were a series of arrows pointing to the correct road and the name Hob at the top. We had a great evening with Hob and his wife at our home during our time off the trail and seeing his name in the dirt and knowing he had been this way a week earlier bought a smile to our faces.

Not knowing what to expect at the reservoir we were greatly pleased to see a large expanse of water complete with two guys in a boat fishing. We met two cyclist doing the continental bike trail next to the reservoir and we spent some time getting to know them.

We headed to the waters edge for breakfast and in my case a swim. I never miss a chance to get in the water and while it was cold when you first got in it felt beautifully refreshing. I could not convince Yeti to get in all the way but she enjoyed having enough water to at least wash some of the dust off.

The bike riders came down to filter some water for their next leg. On their route their information said the next water was 70 miles ahead. They wanted to take at least 6 litres each and started filtering with their Sawyer mini. They were having the same problem with their filters that we had in New Mexico and the water was barely dribbling out. We decided that the sawyer were just some sort of cruel joke so we swapped ours out for the much heavier but much much better First Need XL filter we used on our horse pack trips. I took pity on these guys and offered to pump some water for them. Within a few minutes I had filled their bag that would have taken at least an hour with the Sawyer. They were thankful and said if they did this again they would definitely swap to the First Need.

Leaving the water was hard especially when the day was heating up and the wind was starting to howl but leave we did.

Another long flat, then a small hill followed by a long flat. This time however the trail had some new twists for us. The two track turned to sand, the wind picked up to gale force that would knock me from side to side as it gusted. At over two hundred and ten pounds and with another 40 pounds in my pack it takes a lot of force to move me but this wind was easily pushing me from side to side. Yeti was having a much harder time and it become a real drudge. We pressed on for about 4 hours into this wind and arrived at our next water stop, a piped spring. We were both exhausted. We spread our mat on the ground, circled our packs and put our umbrellas up to try and make a wind break. We lay there with our feet soaking in the water with the occasional gust of wind making it through our fortifications bringing with it a fine spray of dust. We were both covered in dust. Every time you took a drink you could feel your teeth grinding with dust. Small cakes of mud would come out of your eyes as your eyes tried to clean themselves with tears. It does not sound like a place to take a rest but believe me it was a lot better than walking.

We sit next to the pond for a couple of hours and the move on again. We planned to do a couple of more miles and find a spot to camp next to the trail. As the evening progressed we started to climb into a valley and we got a small break from the wind.

It is amazing out here that with all this open space it is hard sometimes to find a place to put up our tent. The ground is covered with low sagebrush with its thick twisted trunks snaking along the ground. These trunks are too lumpy to sleep on and rarely are spaced far enough apart to fit our tent. Tonight as we head exhausted up the valley the sage is doing its best to thwart our attempts at a good nights sleep. We look for several miles of trail with no luck and eventually decide we are only a mile from the next water source and so should push on to that. Camping next to water is a luxury and after today we could do with all the luxury we can get.

We end up doing 23 very hard miles and finding a spot of semi level grass near the small stream. A hot dinner went someway to relieving some of the exhaustion and bed was very welcome. 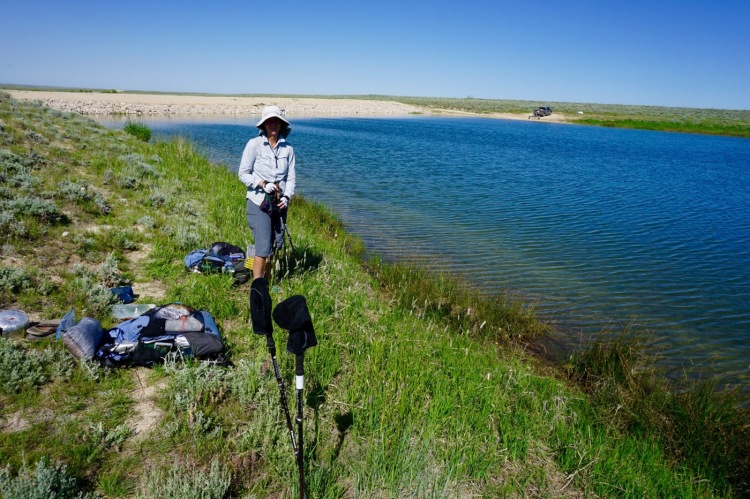 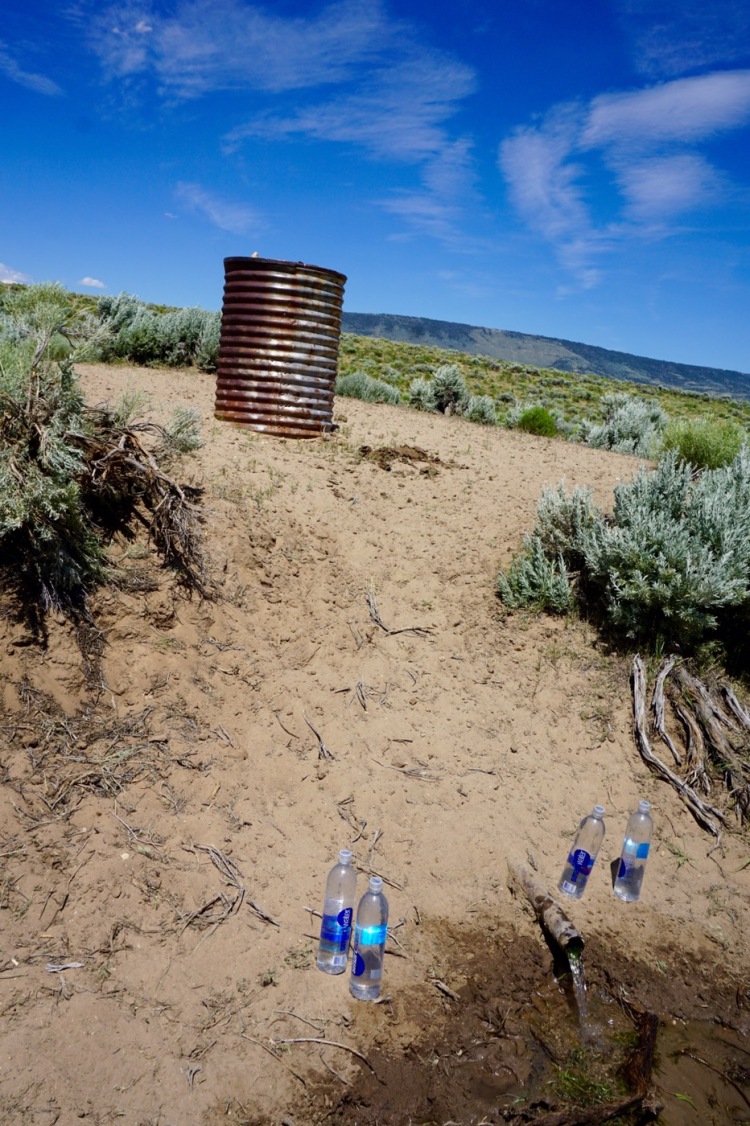 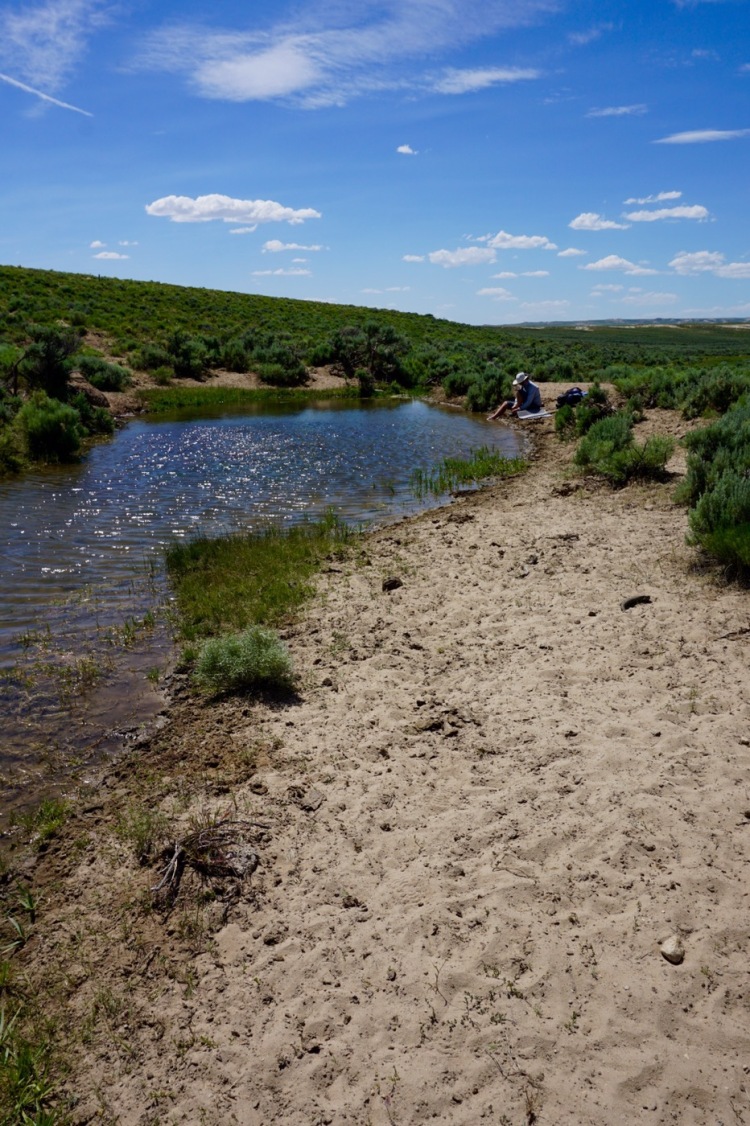 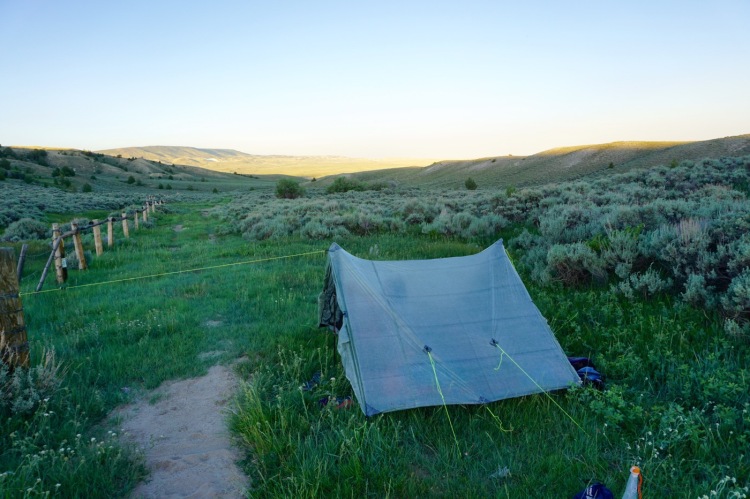 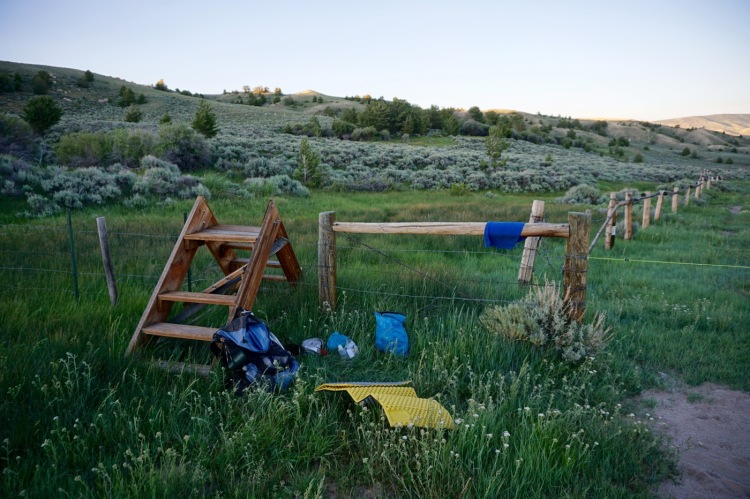